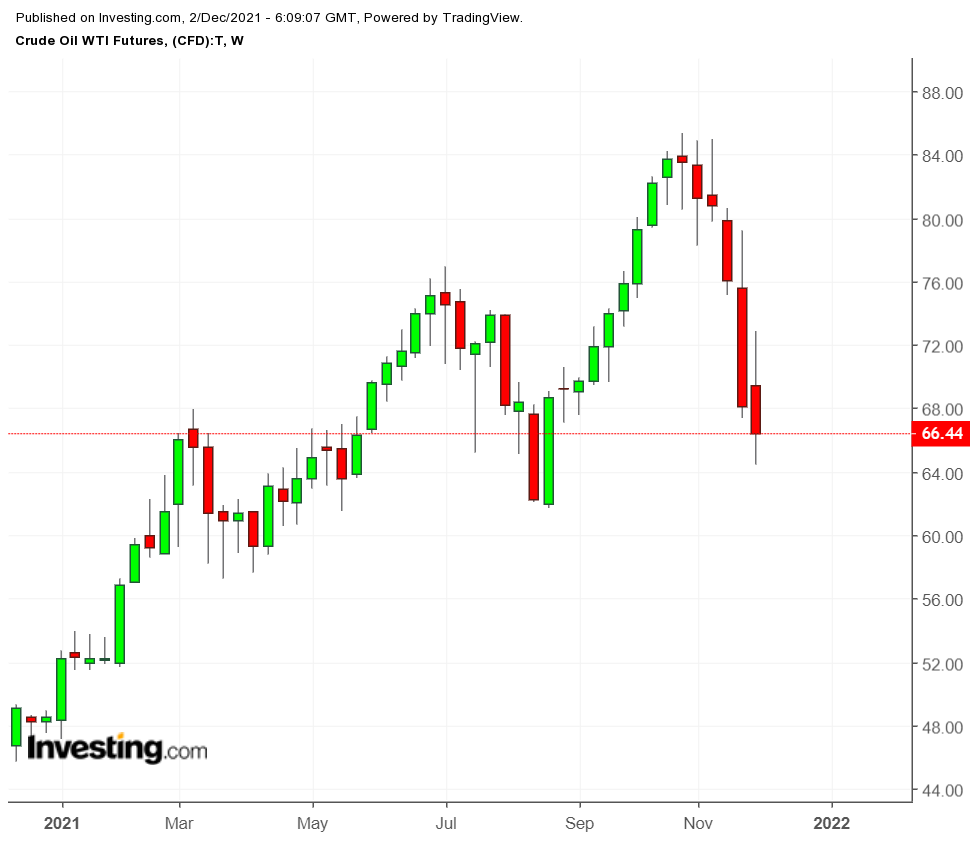 In the United States, Friday was also the day after Thanksgiving, so many traders were celebrating with family instead of watching the markets, even though exchanges were open. This lower than usual volume of participants may have contributed to the volatility.

The decline was primarily triggered by fear and uncertainty. Very little was known or understood about the Omicron variant including how harmful it might potentially be and the extent of its spread. Many so-called experts and government officials assumed the worst.

Very quickly, several governments—including the U.K., Netherlands, Japan, and Israel—responded to the news by closing or limiting access to their borders.

In some cases, only arrivals from the southern region of Africa were blocked. Japan and Israel temporarily shut their borders entirely to foreign nationals. These closures incited fears of further travel restrictions and an overall dive in flights globally.

In the days since Nov. 26, a total of 56 countries have instituted some sort of travel ban designed to “guard” against Omicron.

Given these reactions to the new COVID-19 variant along with the still prevalent uncertainty fueling ongoing volatility in the oil market, there are three major issues traders should consider that could impact the demand outlook and thus drive pricing:

1. Was the drop just a temporary blip on the way to higher prices?

Australia, Israel, and several European countries even announced that they already found the Omicron variant circulating among their populations, leading to hopes that the travel restrictions aren’t necessary. On Wednesday, the U.S. also announced the existence of Omicron within its borders.

However, on Tuesday and Wednesday oil prices slid again as the Biden administration announced that it was considering enacting much more stringent travel testing and quarantine procedures that would make travel out of and into the United States more difficult for citizens and visitors.

Despite the news that Omicron has already gone global, the panic seems to have triggered real fears of a drop in oil demand. As of Wednesday, the fears had not subsided.

2. What does this mean for the oil price forecasts?

With both Brent and WTI below the $70 per barrel mark as of Wednesday, Dec. 1, it seems that the OPEC and IEA forecasts are proving more accurate than those issued by the big banks. OPEC and IEA may have had better forecasts, but they did not know why or how the market would face lower prices.

With only one month left in 2021, it looks unlikely that prices will hit $90 per barrel oil this year as some banks had forecast at various points in 2021. Banking institutions still seem convinced that oil prices should be heading higher. Goldman Sachs even issued a note explaining why its analysts believe this selloff is overdone and why oil prices should be higher under current circumstances.

3. How does this move impact OPEC+’s month-to-month decision making?

After the price tumble, OPEC and OPEC+ moved their meetings one day later to give themselves additional time to assess the market in light of the news. OPEC met yesterday but did not discuss oil production policy issues at that meeting. Instead, the cartel focused on bureaucratic matters such as budgets and appointing a new Secretary General.

There are some indications that OPEC+ might decide to pause its scheduled 400,000 bpd monthly increase at its Thursday meeting, but it is not clear how long this pause could be. Russia and Saudi Arabia have not given any indication as to whether they want to pause or go forward with planned production increases. They have only said that they plan to consider the market indications of the most recent developments.

Many analysts believe that the group will pause its production increases in light of the SPR release from the U.S. and other countries and the drop in prices from the Omicron scare. On Wednesday morning, an internal OPEC report was leaked to Reuters, showing that OPEC’s forecast sees the oil surplus growing to 2 million bpd in January, 2022, 3.4 million bpd in February, 2022, and 3.8 million bpd in March, 2022.

Many analysts view this as a reason to believe that OPEC+ will not proceed with its planned increase, but we can’t yet assume this is true.

Read Oils Wild Price Ride And What Omicron News Could Mean For Traders by Investing.com

Worry about ice-cold demand, not red-hot inflation, this strategist argues. How to play that scenario.

Read Worry about ice-cold demand, not red-hot inflation, this strategist argues. How to play that scenario. by MarketWatch

Coronavirus: Adults in Washington DC schools required to vaccinate with no testing option — as it happened

Read Coronavirus: Adults in Washington DC schools required to vaccinate with no testing option — as it happened by The Financial Times

Coronavirus: Texas becomes US state with fourth-highest death toll – as it happened

Read Coronavirus: Texas becomes US state with fourth-highest death toll – as it happened by The Financial Times

Is Teslas Valuation Cheaper Than Rivians? Gene Munster Breaks It Down

Read Is Teslas Valuation Cheaper Than Rivians? Gene Munster Breaks It Down by Yahoo Finance